Spain remains the most popular destination for British tourists and expats. The climate is a major draw, but the beaches, excellent food and drink, friendly Spanish people, laid back lifestyle, culture and historic cities add to its attractiveness. Spain has a long history and this has impacted their culture.

Spain has a total area of 505,990 km² and is comprised of the Iberian Peninsula, the Canary Islands off the coast of Africa and the Balearic Islands in the Mediterranean.  It has a population of 46.7 million of which 87% are ethnically Spanish.

Mainland Spain is a mountainous country, dominated by high plateaus and mountain chains.  The Mediterranean climate, characterised by warm/hot and dry summers, is dominant in the peninsula. The South East quarter has a semi-arid climate with higher temperatures and lower rainfall and the oceanic climate in the North East with milder temperatures in the summer and winter.

Spain has a long history with the Romans creating Hispania as a political, legal and administrative unit.  The Moors invaded Spain in 711 and ruled in parts of Southern Spain for 700 years.  These Roman and Moorish influences remain in Spain in the buildings and in the culture.  In more recent times the Spanish Civil War between 1936 and 1939 resulted in 36 years of military dictatorship under Franco.  Franco restored the monarchy before his death in 1975, which made King Juan Carlos I his successor.  King Juan Carlos led the Spanish transition to democracy and after a referendum, a new constitution transformed Spain into a parliamentary democracy under a constitutional monarchy.

Spain has a rich heritage in the arts with painters including El Greco, Bartolomé Esteban Murillo and Francisco Goya from the Spanish Golden Age and Pablo Picasso, Salvador Dalí and Joan Miró in the 20th century.

The country’s architecture is a combination of Romanesque, Mudéjar architecture influenced by the Moorish occupation, Gothic, Spanish Baroque and other styles.  In more recent times modernism has had an impact and one of the most dramatic architects was Gaudí with the Sagrada Família his most famous creation.  As a result Spain has the third highest number of World Heritage Sites in the world.

Religion and Beliefs in Spain

Roman Catholicism was the official religion of Spain until 1978 when the new constitution established freedom of religion.  According to the Centre for Sociological Research, in September 2018 66% of Spaniards identify as Roman Catholic, 26.4% as atheists and 2.4% as followers of other faiths.  Most are not active participants, however, with 61% barely ever attending mass and 16% attending only a few times a year.

Although religion is not as important as it once was church feast days are marked by fiestas in every village and town throughout the country.

Spain has four official languages. The most prominent of the languages is Spanish (Castilian), spoken by about 99% of Spaniards as a first or second language and is the only official language throughout the country.  The other languages are co-official in the regions in which they are spoken.  Catalan (or Valencian) is spoken by 19%, Galician by 5%, and Basque by 2% of the population.

English is widely spoken in areas where tourists are seen, but maybe less common in rural areas away from the resorts and major cities.

Family and the extended family is important in Spain.  You will often see large family groups in restaurants and as children do not have set bed times young children will often be seen with them late into the evening.

Although it is less common for three generations to live in the same household as it once was the family is still who people turn to when times are hard.  Children are at the centre of the family life, although there has been a trend to a lower birth rate as couples place greater emphasis on career and lifestyle (the birth rate in Spain reduced from 3.01 births per woman in 1964 to 1.33 in 2016).

Sport in Spain is dominated by football with very successful club sides, like Real Madrid, Barcelona and Atlético Madrid as well as the national team, which won the World Cup in 2010 and the Euros in 2008 and 2012. Other sports are also popular, including basketball, tennis, cycling, handball, motorcycling, Formula One, water sports, rhythmic gymnastics, golf, bullfighting and skiing.

Spain produces 44% of the world’s olives and olive oil is central to Spanish cooking.  Markets are part of the way of life and cooking with fresh ingredients bought from the market is common.  Supermarkets are common, but the open market remain important part of life in Spain.

The day in Spain is differently structured than most other western countries and the later lunch and very late evening meal is facilitated by a series of light meals.  Many Spaniards have a light early breakfast and then a second breakfast mid-morning.  Lunch is eaten between 1pm and 4pm either at home or in a café.  Eating out is common and the evening may involve some early sandwiches in a salones de té or pastelerías or tapas and a beer in a bar and then sit down to eat as late as midnight.

Tipping is not expected in Spain.  In restaurants 5% to 10% is all that most Spaniards would tip and  with the bill rounded up in taxis. 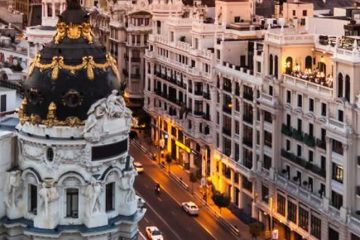 Moving to live and work in Spain.

Spain remains the most popular destination for British tourists and expats. The climate is a major draw, but the beaches, excellent food and drink, friendly Spanish people, laid back lifestyle, culture and historic cities add Read more…